When you think of rocks, the chances are you’ll start picturing a rugged landscape with mountains and rocky outcrops. You might picture climbers, scaling great heights with ropes. Or walkers, scrambling over a ridge. You’ll most definitely be picturing something on dry land.

But there’s a whole world of rocks and ‘landforms’ hidden beneath the waves, shaping the ocean floor and providing valuable habitats for marine life. We asked Marine Scotland to tell us about one of their research projects – OFFCON – that aims to map the seafloor in an area to the west of Scotland.

Rockall, a tiny island just 19 metres high, sits on the very extremity of Scotland’s marine environment. Some 180 miles due west of St Kilda, it is buffeted year round by the extreme winds and swell that the North Atlantic weather generates. As such, it is Scotland’s only truly offshore shallow ecosystem. The islet of Rockall is actually the only part of vast plateau of submerged continent that remains above sea-level. In 2011 – 2012, as part of a research project (Offshore Fisheries and CONservation: OFFCON) that aims to map seafloor habitats, fish distribution and fishing activities at Rockall, two surveys on MRV Scotia were undertaken. 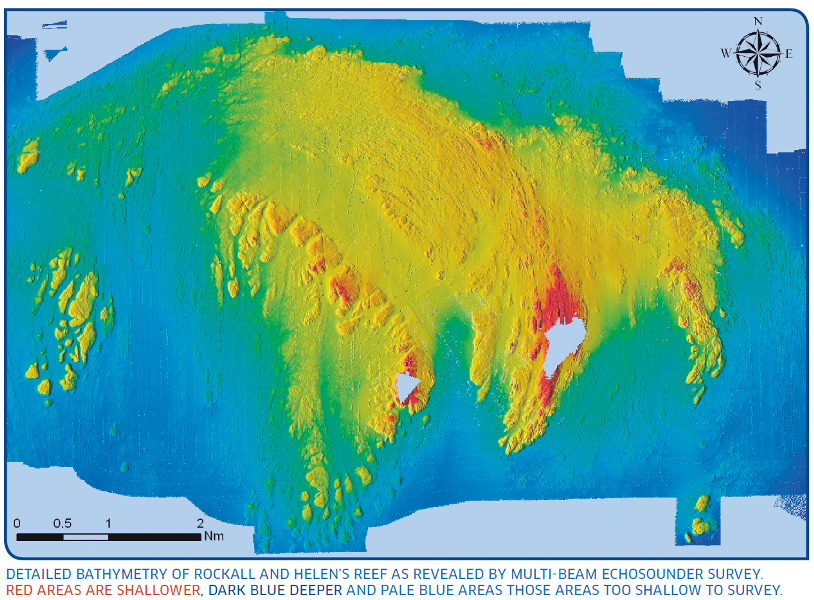 The OFFCON surveys have shown that Rockall supports stocks of haddock and monkfish, and has a particular fish fauna quite distinct from elsewhere in Scotland including rare species such as the frilled shark, a living fossil. In the deeper areas of the plateau, video surveys have revealed some of the most extensive coldwater coral reefs in the north east Atlantic. Deeper still, at depths of 1200m, species of bivalves and polychaete worms, collected with a benthic sampling net, turned out to be new to science and of the type only found in association with methane seeping from the seafloor. In 2015, as part of collaboration with MASTS, a further Scotia survey confirmed the presence of a previously unknown cold-seep ecosystem in the region.

A main objective of the surveys was to map the shallow reef areas around the islet of Rockall using a high resolution ‘swathe’ multibeam. This technology allows the seabed to be mapped to within a metre or two of spatial resolution. What emerged was truly spectacular; numerous previously unchartered pinnacles, trenches, mounds, ridges and bedrock reefs were revealed. The rock itself turns out to be a minor feature, compared with Helen’s Reef that extends in a great sweeping arc of fissures and ridges to the north-east. Between the rock and Helen’s reef is a deeper trench, which is frequented by fishermen targeting squid.

The data collected are being used to build a better basis for the spatial management of the area for both fisheries and the conservation of vulnerable and unique marine habitats. For example, in 2013, data from the surveys were being used by the International Council for the Exploration of the Sea (ICES) as a basis to protect certain areas from potentially damaging bottom-contact fishing.

Learn more about the seabed mapping of Rockall that was carried out aboard Marine Scotland’s research vessel the MRV Scotia.

If you’re looking for data on the marine environment visit the Marine Scotland Information portal (MSI), which is home to interactive maps, geospatial data and other related data that can be searched, viewed and downloaded. Or why not use the National Marine Plan interactive (NMPi) online GIS-based tool to view data and information as layers on a map, including the Rockall dataset.