When viewed over long-term averages, we expect the UK to experience more milder wetter winters and more hotter drier summers in the future. These changes in climate and their effect on our weather will have major implications for our way of life. 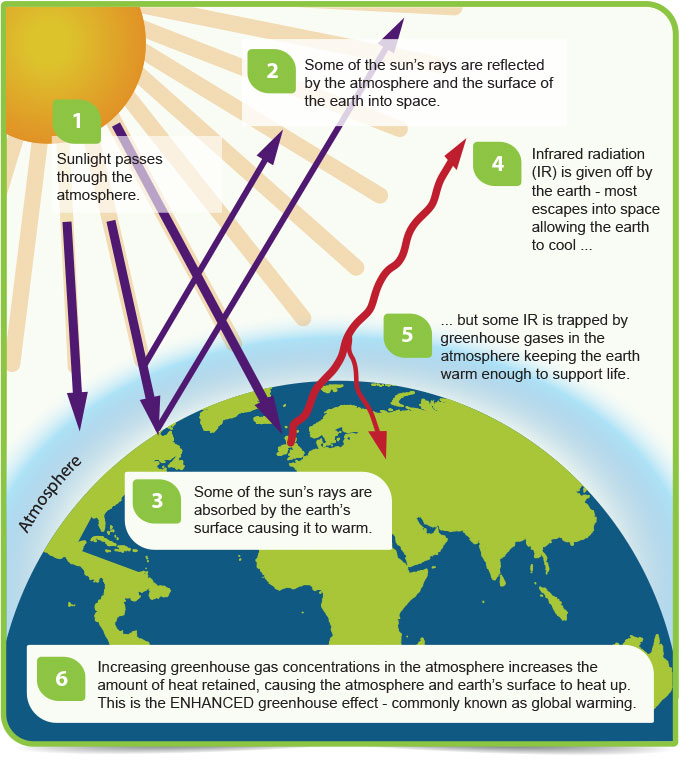 The infographic explores the difference between weather and climate, what drives our climate and how our climate is changing - View the full infographic at the Met Office - What is climate change?

The Met Office has separated Scotland into three climatic zones – Northern, Eastern and Western – describing the main features of each region’s climate.

Regional weather summaries and data download of the time-series monthly, seasonal and annual regional values are also available from the Met Office.

The Official statistics publication for Scotland "Scottish Greenhouse Gas Emissions 2017" was published in June 2018 and contains the results of the Scottish greenhouse gas inventory for 1990-2017. A key tool for understanding the origins and magnitudes of the emissions and the assessment of policies designed to control or reduce emissions. 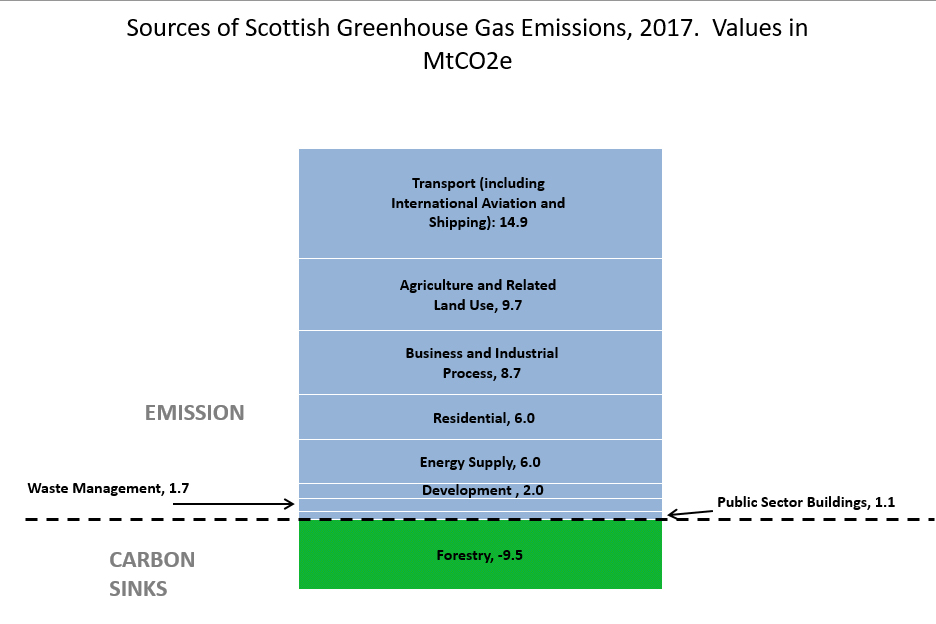 The Intergovernmental Panel on Climate Change (IPCC) report Climate Change 2013: The physical science basis confirms that since the late 19th century the atmosphere and ocean have warmed, amounts of snow and ice have diminished, the sea level has risen, and concentrations of greenhouse gases in the atmosphere have increased.

Each of the last three decades has been successively warmer at the Earth’s surface than any preceding decade since.

ClimateXChange have produced three short briefs that summarise the reports on:

NASA conducts a program of breakthrough research on climate science. It runs programs to obtain and convert data from Defense Department and National Oceanic and Atmospheric Administration (NOAA) satellites as well as from some European, Japanese and Russian satellites. NASA also sponsors field experiments to provide "ground truth" data to check space instrument performance and to develop new measurement. 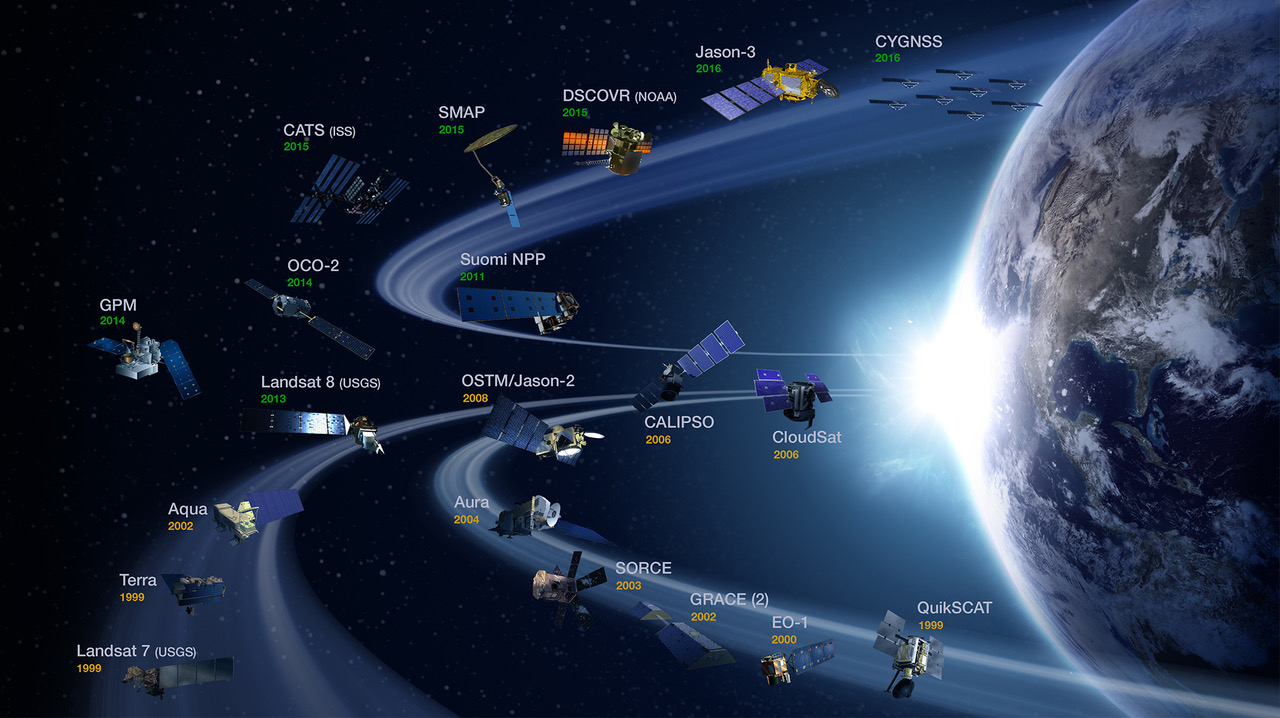 NASA has more than a dozen Earth science spacecraft/instruments in orbit studying all aspects of the Earth system (oceans, land, atmosphere, biosphere, cryosphere), with several more planned for launch in the next few years.

With 197 parties, the United Nations Framework Convention on Climate Change (UNFCCC) has near universal membership and is the parent treaty of the 1997 Kyoto Protocol. The Kyoto Protocol has been ratified by 192 of the UNFCCC Parties. The ultimate objective of both treaties is to stabilise greenhouse gas concentrations in the atmosphere at a level that will prevent dangerous human interference with the climate system.

The 2015 Paris Agreement builds on the Convention, bringing all nations together to work towards combatting climate change and adapting to its effects. Its key aim is to keep the global temperature rise this century to well below 2 degrees Celsius above pre-industrial levels and to pursue efforts to limit the temperature increase to 1.5 degrees Celsius. To date (March 2019) 185 parties have ratified the Paris Agreement.

The SCCAP policies and proposals have clear objectives and timelines. ClimateXChange have developed adaptation indicators to assess how well Scotland is doing against these objectives.

Scottish Ministers report annually on progress towards achieving the objectives and implementing the proposals and policies set out in the SCCAP.

Scotland’s soils contain large amounts of organic matter and form a significant carbon store. Losing just 0.5% of our soil carbon in a year as carbon dioxide, would double our annual greenhouse gas emissions. It is important to manage soils carefully to ensure the carbon stays in the soils and does not escape into the atmosphere as greenhouse gases.

View the distribution of carbon and peatland classes across the whole of Scotland on Scotland’s soils website. 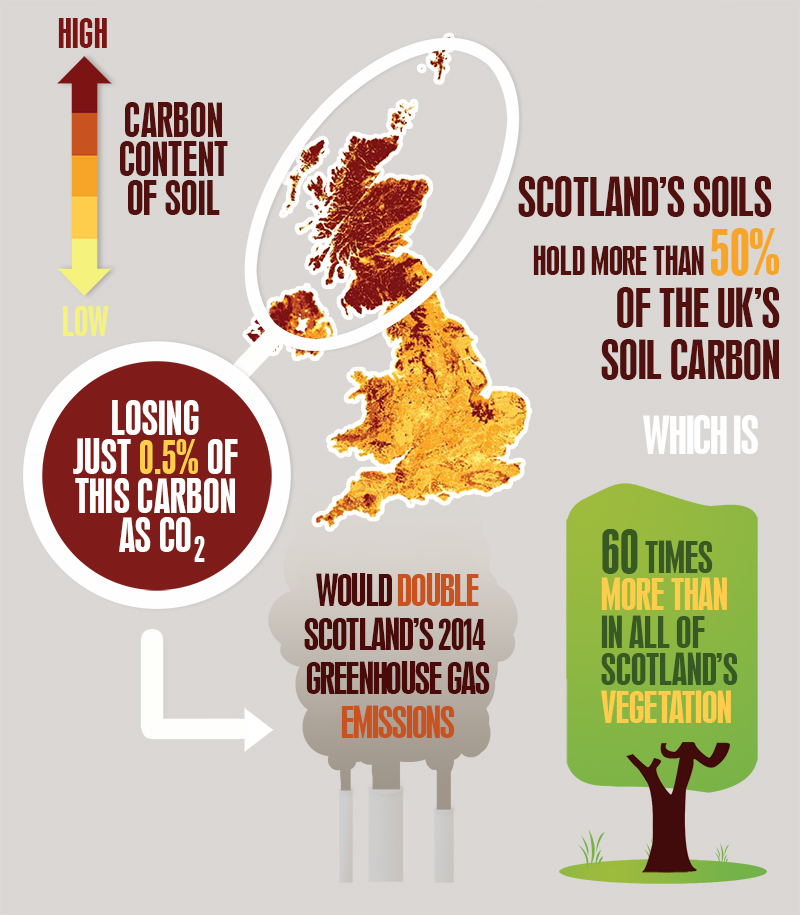 Peatlands in good condition actively form peat, removing CO2 from the atmosphere and storing carbon in the soil. Conversely, degraded peatlands may emit more CO2 than they remove and become a net source of greenhouse gases (GHG).  Peatland restoration is therefore encouraged to help remove GHG from the atmosphere and combat climate change. The Scottish Government's Climate Change Plan sets targets to restore 50,000 hectares of degraded peatland by 2020, increasing to 250,000 hectares by 2030. The Peatland ACTION project is helping to restore damaged peatlands in Scotland.

Farming for a better climate – provides practical support to benefit the farm and help reduce our impact on the climate. Taking action as a sector, both to reduce greenhouse gas emissions and to adapt to a changing climate, will secure farm viability for future generations.

The Climate Change (Scotland) Act 2009 makes a commitment to cut greenhouse gas emissions in Scotland by 80% of 1990 levels by 2050 with an interim target of a 42% cut by 2020 . The Act sets a framework for action in Scotland to reduce emissions as well as adapt to a changing climate.

ClimateXChange - provides independent advice, research and analysis to support the Scottish Government as it develops and implements policies on adapting to the changing climate and the transition to a low carbon society.

Committee on Climate Change - an independent, statutory body established to advise the UK Government and Devolved Administrations on emissions targets and report to Parliament on progress made in reducing greenhouse gas emissions and preparing for climate change.

Scottish Forestry (SF) - has an ambitious target to extend woodland cover in Scotland by an additional 100,000ha over the period 2012-2022. This would lock up around 4 million tonnes of extra carbon dioxide by 2027, whilst also providing a range of other environmental, economic and social benefits.

Historic Environment Scotland - is working on projects to mitigate emissions from our own operations, adapt our buildings and make our activities more sustainable. The organisation also supports the public and partners by providing advice and publishing research on measures to: improve energy efficiency in traditional buildings; adapt traditional buildings to the changing climate.

Met Office - the UK's national weather service and a centre of excellence in weather and climate science.

Scottish Environment Protection Agency (SEPA) - works with the Scottish and UK governments and the other UK environmental regulators to implement and enforce national legislation and European directives that aim to reduce emissions and improve energy efficiency. SEPA also participates in the development and revision of guidance, policy and legislation to tackle climate change.

The Scottish Government - recognises climate change will have far reaching effects on Scotland’s economy, its people and its environment and is determined to play its part in tackling climate change.