As part of his first year PhD studies with the Hydro Nation Scholars programme, Kerr Adams interviewed 28 stakeholders associated with freshwater environments in Scotland. The following blog is a round-up of his findings of stakeholder perspectives on knowledge gaps that need to be addressed to help Scotland's freshwater environments become resilient to future change.

During my first year as a Hydro Nation Scholar with focus on the project ‘Scotland's water landscape and its resilience to change’, I’ve had the great opportunity to engage with a broad range of water stakeholders, including managers, researchers and policy-makers. 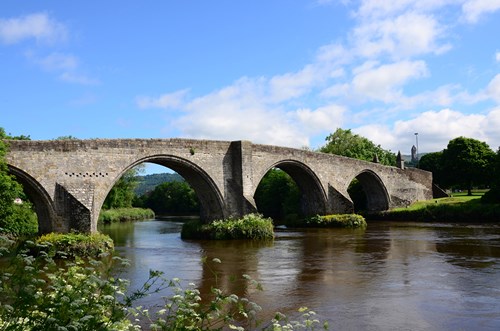 Through a process of stakeholder interviews, participants were asked a series of questions which would help to:

As a result of this research, the following headline knowledge gap has been identified:

How can multiple drivers for change and their future interactions influence pressures on Scotland’s freshwater environment?

Currently, how individual drivers in isolation can influence future pressures is understood relatively well, for example, the impacts of climate change on both future flood and drought events. There is now a need to adopt a systems-thinking approach to identify how the interactions between multiple driving forces might influence water pressures in the future. A better understanding of these interactions would allow stakeholders to better co-manage water resources and identify resilient water management and policy options.

This headline knowledge gap is consistent within the following, more specific research needs, which include examples of where the influence of multiple driving forces could impact both water quality and quantity:

Future water demands – water scarcity and low flow conditions are expected to increase in frequency and intensity during summer months. There is a need to better understand how future water demand might be influenced by changes in multiple driving forces such as climate, population, land-use and identify ways in which increased water efficiency can be achieved.

For example, the water scarcity events are mainly considered to be a result of drier periods during summer months, which is driven by climate change. This pressure on water resources can then be exacerbated due other drivers such as; future increases in population resulting in increased demand for public water supplies, increased competition between industries and sectors who rely on freshwater resources to make products or grow food and changes in societal attitudes and actions including the increased use of water for recreation during warm summer spells.

To address these issues, stakeholders emphasised a need to better understand how the decision of one water user may affect other users and that better co-manage freshwater resources was required. Other related needs include investigating the possibility of identifying new freshwater sources and how changing crop patters to more irrigation intensive crops in the future might influence water demands.

Working with nature – understanding the impacts of large-scale land-use changes on both water quality and quantity needs to be investigated further. Stakeholders wanted to investigate the impacts of restoring natural processes could have on building resilience through water attenuation and storage to extreme hydrological events (both flooding and drought). Land-use change examples included increasing forest cover, re-naturalising rivers, peatland restoration and larger natural flood management projects at the catchment scale.

This research need would also seek to determine realistic timescales for implementation and identify locations where the large-scale restoration projects would be most effective. Discussions also included analysing multiple benefits that could be achieved through working with nature, including the reduction of river temperatures and increasing organic loads in upland rivers to protect salmon species, which are an iconic species for Scotland’s freshwaters.

Water value – due to the nature of the Scottish public water supply – where water supply and wastewater services are charged at a fixed rate rather than metered - it is suggested that the people of Scotland don’t understand the impacts their behaviours can have on the water environment. Therefore, there is need to better understand how the people of Scotland value their water resources.

Addressing this knowledge gap would involve educating the population on the important role their actions can have on preserving the quality and quantity of Scotland’s freshwater resources and the wider environment. Better understanding the values towards freshwater resources of business and industry that consume and pollute water resources was also highlighted as a research area, this could allow for the identification and adoption of better practice.

Integrated development planning – the need to better understand how a more integrated approach in planning and design of urban areas can be achieved. A systems-thinking approach involving multiple stakeholders from a range of sectors could help create resilient development plans which are more creative and innovative to consider pressures such as flood risk and water scarcity.

In terms of flood risk and building in flood risk areas, stakeholders were against developing in flood plains, while there was also a suggestion of building homes that plan to have valuable living areas in upper sections of the design to protect people’s valuable assets and reduce continuous flood insurance claims. There were also calls for development designs to become more water efficient and encourage the use of natural run-off treatment options and water re-use.

Asset condition – to better understand how resilient water industry and infrastructure assets are to the impacts of multiple drivers such as the effects of climate change, stress on assets due to increasing populations and changes in land-use and management in terms of the emergence of new water contaminants.

These research need is important for understanding the levels of future investment that will be required to ensure infrastructure and assets are resilient to extreme events such as high intensity rainfall, efficient in areas where water scarcity may become an issue and innovative enough to adapt to the issue of emerging water contaminants that are of concern to both human health and environmental quality.

What are the key drivers and pressures that Scotland’s water landscape will have to become resilient to in the future?

Stakeholders provided their perspective on the pressures and their associated drivers they believe will have the greatest influence on Scotland’s water resources in the future.See Fig 1. graph including descriptions for each of the pressures. 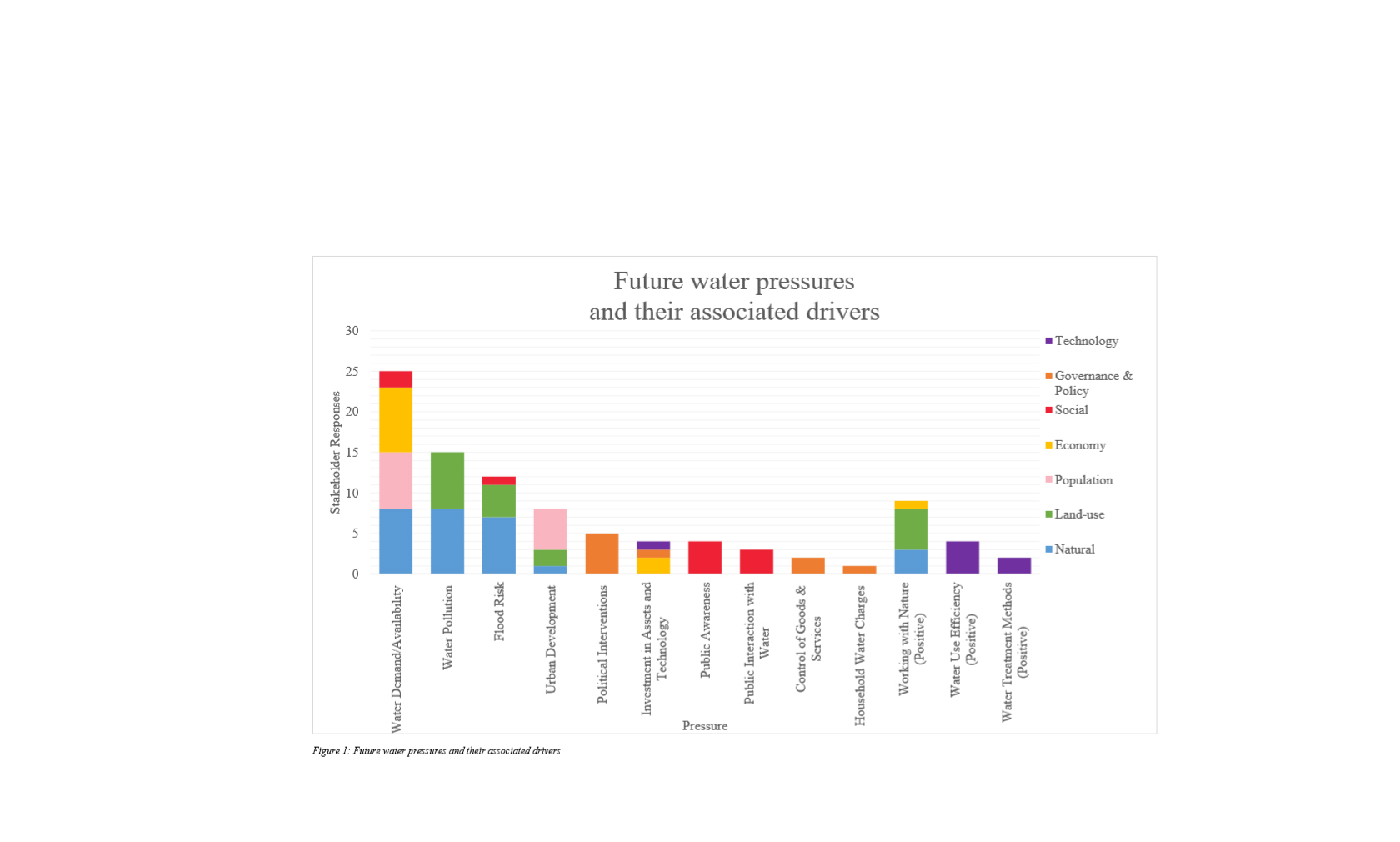 The majority of responses considered water availability as the a key future pressure, which coincides with the research need for a better understanding of future water demand during water scarcity and low flow conditions.

There were multiple driving forces associated with the pressure of future water availability, which include the economy (overconsumption from industry), increasing population, changes in natural processes (climate change) and the way in which society values their water resources in regard to consumption and water use efficiency. The influence these multiple driving forces can have on water availability emphasises the headline knowledge gap. Other key pressures, such as pollution and flooding are also influenced by more than one driver for change.

Drivers leading to potential positive future change include working with nature which is considered a potential opportunity to address some pressures such as flooding and pollution, which is discussed in the working with nature research need. Technology was also seen as a driver for enabling positive change for addressing pressures in water use and quality through the adoption of water efficient technologies and technologies that will cope with emergent contaminants.

The importance this has for Scotland the Hydro Nation

The quality and quantity of Scotland’s freshwater water resources provide vital ecosystem services that support the economy, people’s health, social well-being and the nation’s environment. Scotland the Hydro Nation is a Scottish Government agenda introduced into legislation in 2013. The agenda aims to develop water resources that bring maximum value to both the Scottish economy and the ecosystem services they provide. Scotland’s water is renowned for its contribution to impressive natural landscapes, its drinking-water quality from the tap and as a key ingredient of the famous Scotch whisky.

To maintain the reputation as a Hydro Nation, Scotland must address the knowledge and research gaps described to become resilient to the future pressures identified by stakeholders. Developing a better understanding of the interactions between different drivers, and the impacts they could have on future freshwater pressures will be an important factor when identifying adaptive management or policy options that are required when seeking to achieve resilient outcomes, enabling Scotland’s freshwater environments to continue providing their vital ecosystem services.

The next stage of the project will take place in a Fife catchment, collaborating with stakeholders to determine what combination of adaptive management options can help deliver resilient solutions. These solutions will aim to achieve good ecological status within the catchment, reduce resource use and enhance the valuable ecosystem services that help make Scotland a Hydro Nation.

Specific details regarding a series of workshops to achieve this collaborate approach will be available in the spring of 2020. These workshops will explore the headline knowledge gap of how multiple driving forces might influence future pressures within the catchment.

The specific research needs discussed in this blog will be communicated to the wider academic community and strategic research bodies throughout the PhD process. I also encourage stakeholders and their organisations to continue to collaborate and address these needs for future freshwater resilience, the next stages of the project will be designed to facilitate these collaborations.