The summer of 2022 has seen record-breaking temperatures and here we look at some of the effects heatwaves can have on levels of air pollution.

As Europe and the UK experienced some of the highest temperatures on record, much of the focus was on the direct health impacts of the heat, the risk of wildfires, water scarcity, and the influence of climate change, which is thought to have increased peak summer temperatures by several degrees.

Levels of air pollution and our air quality can also be adversely impacted by extreme temperatures and during the July and August 2022 heatwaves, we observed regional air pollution episodes that affected much of the UK and Western Europe.

The July heatwave was driven by extreme heat from North-West Africa which moved across the Iberian Peninsula and France, before reaching the UK on 18th and 19th July [source: 2022_03_july_heatwave (metoffice.gov.uk)]. High pressure located over Central Europe created the ideal conditions for the widespread formation of ground-level ozone. The UK also experienced a second less intense but more prolonged heatwave that peaked on 13th and 14th August.

Stratospheric ozone, also known as the ozone layer, is formed in the upper atmosphere and protects the Earth by filtering out dangerous ultraviolet (UV) radiation from the sun. Ozone can also be generated at ground-level (ground-level ozone) by reactions with other air pollutants in the presence of strong sunlight. This means there is a strong diurnal (day-night) cycle, with lower ground-level ozone concentrations at night and peak concentrations in the afternoon.

SEPA’s Air Quality Live data tool was used to capture daytime ground-level ozone concentrations across the UK and Europe during the peak of the July and August heatwaves (Figure 2). 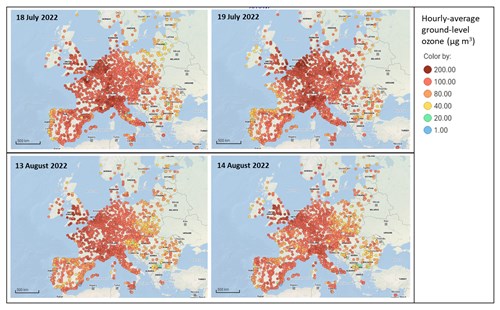 Figure 2: Screenshot of the recorded ground-level ozone concentrations across Europe and the UK at 18:00hrs during the July heatwave (18th and 19th of July) and the August heatwave (13th and 14th August) [source: SEPA Spotfire® visualisation tool - European Air Quality (sepa.org.uk)].

Ground-level ozone is a highly reactive pollutant, triggering asthma and aggravating other respiratory illnesses including pneumonia and bronchitis.  Information on the health effects of ozone (and other air pollutants) and the steps you can take to help protect your health can be found on the Scottish Government’s Air Quality in Scotland website. Here you can also subscribe to various sources of information such as the ‘Know & Respond’ text alert system, which is a free alerting service for when pollution levels are forecast to be moderate, high or very high in your area [source: Air Quality in Scotland website].

Ozone also affects plants which can cause visible damage on leaves and reduce the yield of sensitive agricultural crops. Long-term exposure to ozone has the potential to affect ecosystems, including loss of species diversity.

Impact of heatwave on air quality in Scotland 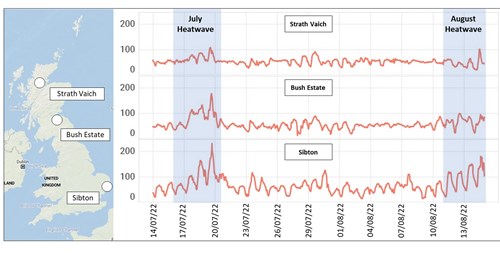 Ground-level ozone concentrations were highest in southern England (Sibton, Suffolk) with July peaks of over 200 µg m-3, coinciding with the period when temperatures of 40°C were recorded for the first time in the UK. During the August heatwave peak ozone concentrations of over 180 µg m-3 were observed (Figure 3).

The temperatures experienced in Northern Scotland were not as extreme as the rest of the UK and ground-level ozone concentrations were correspondingly lower, with peaks of just over 100 µg m-3 at Strath Vaich during July and August (Figure 3).

During the July heatwave, elevated levels of other air quality pollutants (nitrogen dioxide and particulate matter) were also observed.  This was due in part to the long-range transport of pollutants from continental Europe, and low wind speeds which reduce dispersion of local emissions from sources such as transport.

As we continue to reduce air pollution in our city centres by reducing vehicle emissions, urban ground-level ozone concentrations will start to resemble those in rural areas. Ground-level ozone will therefore continue to impact on our air quality and could become more problematic as climate change continues to increase the number and severity of heatwaves. It will therefore become increasingly important to consider the wider health and environmental impacts of this pollutant in future.