Our rocks and landforms: the 'great stone book' of Scotland

Over the next few weeks we’ll be taking a closer look at the topic rocks and landforms; exploring the exciting projects our partners are working on in this area and looking at the maps, data tools and information available on our website to help you find out more about this fascinating topic. And to get things started, in this first blog we’ve asked Hugh Barron from the British Geological Survey (BGS) to explain more about why rocks and landforms are an important part of Scotland’s environment.

Scotland has an outstanding diversity of rocks and landforms created by natural processes over the last 3 billion years or more of the Earth’s existence. They are part of Scotland’s rich geodiversity – the variety of rocks, minerals, fossils, landforms, sediments and soils, and the natural processes that form and alter them. Together, the particular elements of geodiversity record the Earth’s history, as pages of a 'great stone book', and form part of our natural heritage to be passed on to future generations.

Bascal conglomerate of Upper Old Red Sandstone (Devonian) resting unconformably on vertical siltstone and greywacke of Silurian age. Siccar Point has outstanding historical associations, steming from a visit paid by James hutton in 1788, accompanied by Sir James Hall and Professor John Playfair. Hutton's was the first geologist to grasp the true significance of such a structure. 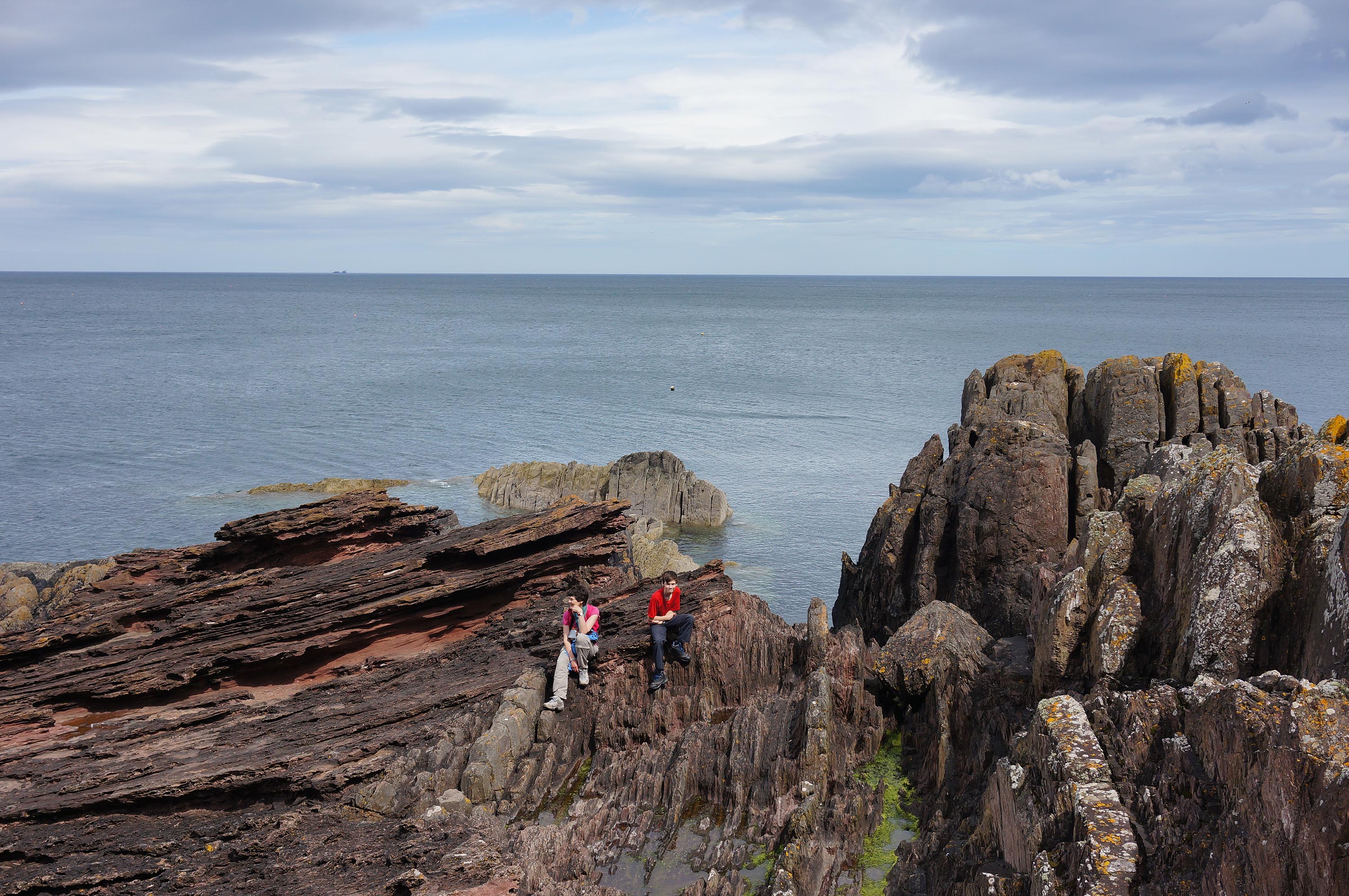 Internationally, Scotland is regarded as the birthplace of modern geoscience, led by geologist James Hutton in the late 18th century. At Siccar Point in Berwickshire, Hutton and  John Playfair (Scottish Geologist and mathematician) unlocked ‘the abyss of time’ and presented a vision of a living world that recognised the crucial links between geology, soils, plants, animals and human beings. Our geodiversity is an asset of national and international importance with many sites celebrated around the world and contributing key aspects of world geoheritage. Our geodiversity is vital for interpreting past geological processes of global significance, such as plate tectonics, mountain building, volcanism, carbon cycling and glaciation and some of Scotland’s rocks also contain a rich variety of fossils that have significantly advanced our understanding of the evolution of life.

Geodiversity is vital as the foundation for biodiversity. The nation’s diverse assemblage of landforms, soils, water, nutrients and natural processes support nationally and internationally important terrestrial and marine ecosystems and species, and Scottish soils store large amounts of carbon, an important consideration in climate change mitigation. We live in a dynamic landscape where understanding of river, coastal, subsurface and slope processes are a vital part of nature-based solutions to management of hazards such as flooding, sea-level rise, coastal erosion, subsidence and landslides.

On land and sea, geodiversity makes a significant contribution to Scotland’s economy as a source of energy and materials, playing a critical role in the:

The distribution of rocks and landforms has shaped human activity in Scotland, from the earliest Palaeolithic settlers up to the present day, influencing sites of settlement, land use and water sources, while the variety of Scotland’s building stone resource is reflected in the local character and distinctiveness of our built environment. Scotland’s geodiversity forms the bedrock of our varied landscapes and spectacular scenery that attracts visitors from around the world and forms a vital part of our economy. Our landscapes also provide the stage for diverse recreation and outdoor activities, contributing to the economy and people's health and wellbeing.

Our geodiversity has been a powerful influence on cultural and intellectual development, as a source of inspiration for art, sculpture, music, poetry, literature and science. It forms part of our ‘sense of place’ and provides what Neal Ascherson called our ‘stone voices’ – “the way human experience in Scotland has been built so intimately into its geology that a people and its stones form a single cultural landscape.”

But perhaps the best description of the importance of geodiversity to Scotland can be found in the Scotland’s Geodiversity Charter (the first of its type in the world) prepared by the Scottish Geodiversity Forum and partners. It presents a vision that geodiversity is “recognised as an integral and vital part of our environment, economy, heritage and future sustainability to be safeguarded for existing and future generations in Scotland”.

We'll be sharing more around the topic of rocks and landforms in our blog over the next few weeks so look out for future posts on our news pages. Or why not take a look at the rocks and landform topic under our environment, which is packed full of information, data and links to where you can find out more, or explore British Geological Survey and our other partners' data on our new map tool.

Our environment - Rocks and landforms