In this blog, we’re shining a light on, and celebrating, some of Scotland’s most dedicated volunteer rainfall observers, who have been actively recording rainfall data, every day for decades – some dating as far back as the 1960’s. This is extremely valuable data to record in all weathers – even during the dry spell that we’ve had recently.

Back in April, we published a blog about the rainfall observers citizen science project – co-ordinated by SEPA and the Met office. Since then, long service awards have been presented to six volunteer rainfall observers who have been recording data for over 30 years. This data is submitted to SEPA and then transferred to the Met Office for entry into the national rainfall archive.

The long service observers we would like to thank for their dedication and commitment are:

As a token of thanks for their years of committed service, each rainfall observer has been presented with a portable sundial, sponsored by the Met Office.

We asked Mike Chalton (pictured below receiving his award from SEPA Area Hydrologist – Eddie Jow) to share some of this thoughts and experiences of being a rainfall observer. 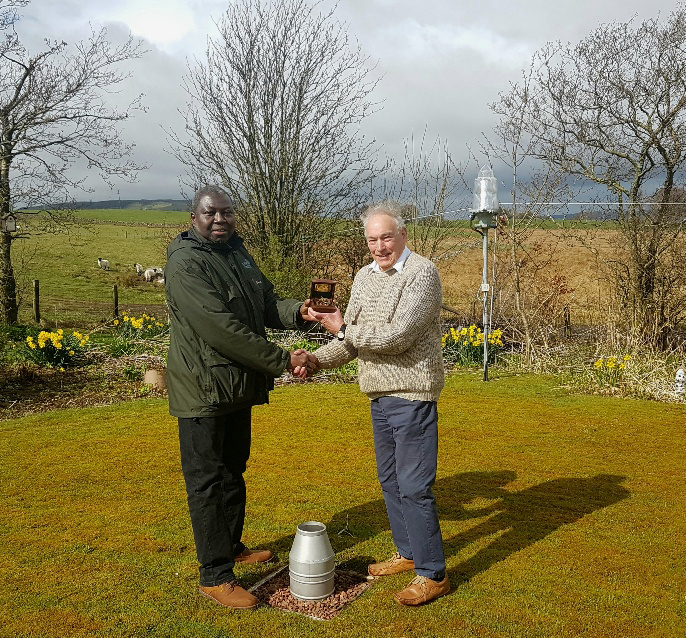 Why did you start rainfall observing?

While in temporary lodgings after moving up to Scotland, I noticed the chap next door was taking rainfall and weather readings every morning. After chatting to him, I thought that would be something worthwhile I could do.

What has kept you observing all these years?

The fact that weather and rainfall records become more valuable and interesting the longer you keep doing it.

What aspects do you find interesting?

A personal goal to take readings as accurately as possible.

Would you recommend rainfall observing to others?

Yes!! It takes only a few minutes of your day, and is most rewarding.

Are there any particular rainfall events that stand out as unusual or do you have any interesting stories from your years observing rainfall?

A day earlier this year when I had to poke around with a stick to locate the rain gauge in very deep snow! Then to carefully carry in the ‘ice cream cornet’ indoors for melting and measuring.

Valuable data to help and understand Scotland’s environment, and the health and safety of people

Recording rainfall is crucial to a number of national services, including weather and flood forecasting. It involves measuring and recording the amount of rainfall each day. Each individual gauge contributes to a network of gauges that attempts to capture rainfall distribution. SEPA currently manages around 400 rain gauge sites around Scotland, of which 120 are public observers.

Grant Kennedy, Hydrometric Specialist in SEPA says “As well as informing the management of Scotland’s water resource and helping protect the water environment, the observations helps understand and prepare for the impacts of Scotland’s changing climate.”

You can view the Met Office rainfall distribution maps to see the data in action – the images below, from the Met Office website, show the differences in actual rainfall for the month of July over the last three years.

SEPA wants to build up their network of online rainfall observer volunteers. Registration is open to any person, school or organisation that is interested in collecting rainfall data.

An online rainfall observer portal is available for recording and submitting rainfall observations – all you need is a rain gauge, access to a garden or other open space and a computer, smart phone or tablet with internet access. You can also view the data you have recorded on a map along with data from other volunteers.