Transboundary air pollution does not stop at national borders. Air pollutants not only impact the country they originate from, but can circulate across hundreds and thousands of kilometres.

As the global pandemic continued, many countries imposed strict lockdowns which restricted people’s movement, whilst improving air quality – but was this the case for all pollutants?

The Environmental Quality and Energy Functions from the Scottish Environment Protection Agency, tell us more.

Despite being in a strict level of national lockdown, like many other countries across Europe, the Netherlands experienced an increase in particulate matter (PM) across their national air quality monitoring network towards the end of March. Levels began to rise on 26 March, reaching a peak on 28 March with reports of the pollution episode emerging across social media [Source 1]. With less traffic emissions and restricted travel across many European countries, including the Netherlands, it’s necessary to look a further afield for the answers. 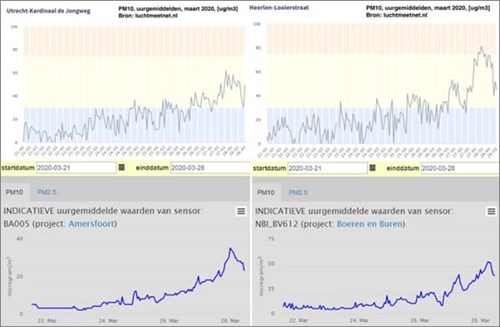 Meanwhile, in Poland and across the Baltic nations night-time temperatures were falling below zero [source 6]. Poland is still heavily reliant on solid fuels as an energy source, with a large proportion of Polish households dependent on district heating systems, fuelled mainly by coal (81.6% in 2017) [source 3]. In response to the Covid-19 pandemic, Poland began to introduce lockdown-type control measures which started on 10–12 March with the closing of school and universities. At the same time of strengthening lockdown measures, elevated levels of PM were being recorded across the country with levels starting to rise in the early hours of 25 March and continuing through to 28 March, 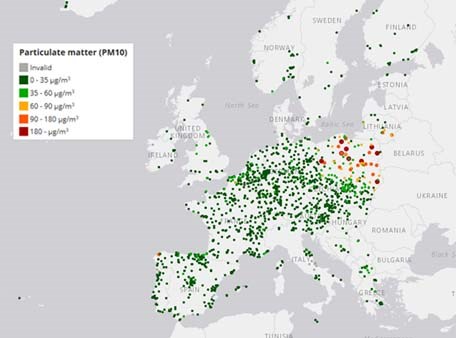 During the same period, much of Eastern Europe experienced clear skies and settled weather. High pressure situated over Belarus resulted in a slow moving air mass over Poland and across the rest of Northern Europe. Pollution emitted across the Baltic states and Poland would have been picked up in the slow moving air mass and transported to other parts of northern Europe. As the air parcels slowly moved across the continent, the pollutants undergo a variety of chemical and physical changes generating secondary pollutants, such as fine particulate matter (PM2.5 and smaller), which was observed on satellite images.

The pollution mass travelling across Europe, began to influence the air quality of other countries. This can be seen by increased levels of fine PM being picked up across monitoring networks, rather than just individual monitoring stations. 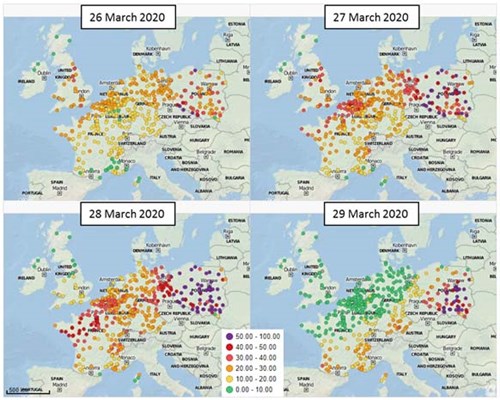 The pollutant plume was picked up by monitoring networks across the Netherlands, Germany, Belgium, Northern France and the UK . Looking across the network, it was possible to track the PM2.5 event across north-west France, with monitoring stations exhibiting similar trends and peaks across all sites. 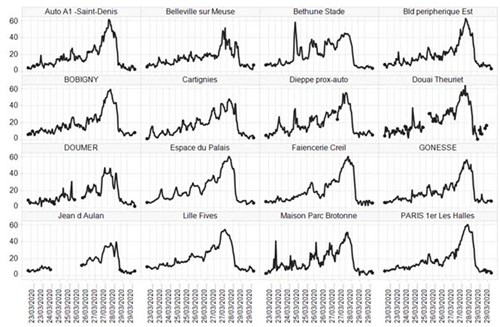 Why is PM not a good indicator for assessing impacts of lockdown across Europe?

As countries across Europe continued with their lockdown measures, or similar travel restrictions, we seen urban levels of NO2 significantly decrease as a result of reduced emissions from transport sources. The same cannot be said about PM (both PM10 and PM2.5) levels. This is because there are multiple sources of PM and meteorology plays a far greater part in their movement and distribution.

As we focus on urban pollution, we can sometimes ignore the wider impacts of air pollution on the environment. We should remember that air pollution, irrespective of its sources shows no respect for local authority boundaries or national borders. The pollution that we release through our everyday activities contributes to poor air quality and human health issues, can cause environmental damage due to nutrient enrichment or direct toxicity and through the combined impacts contribute to climate change.

The Scottish Environment Protection Agency has created a series of bespoke visualisation tools that present domestic and European Environment Agency (EEA) air quality data. The tools allow the user to view data across individual countries, identifying transboundary events, whilst also allowing simple comparisons between cities and nations. These tools are publically available for use and can be found at the following