Working together to bring fish home

Saturday 21 April 2018 was World Fish Migration day, a global event to create awareness of the importance of keeping rivers free from man-made barriers to fish migration. In Scotland, we know of hundreds of man-made barriers that are preventing fish from accessing essential spawning habitat in our rivers. But it’s likely that there are many more out there that we don’t know about. To help us identify where these barrier are, we have developed a barrier recording ‘app' that can be downloaded to a smartphone and used to help us to help the fish. Here you can also find more information about this project and how to get involved.

Iconic fish species such as salmon, trout and eels migrate between the sea and rivers. They also have to make significant in-river migrations to reach important spawning and feeding habitat that will enable them to complete their life cycle. Unfortunately, in many of our rivers, these fish species can’t access this valuable habitat due to man-made obstacles such as weirs, dams and badly designed culverts. Many of these obstacles are legacies of the industrial revolution, others are more recent additions to our rivers. Given the damage these barriers cause to our fish populations, it is crucial that we identify, as far as possible, all fish barriers in our river networks.

To aid this task, the Scottish Environment Protection Agency (SEPA), which is the lead organisation for tackling fish barriers in Scotland, teamed up with Rivers and Fisheries Trusts Scotland (RAFTS), the Environment Agency (EA) and Nature Locator, to create an easy-to-use barrier recording app. The app is free to download to your smartphone from the App Store and Google Play. Using the app you can identify potential obstacles by taking a photograph of the barrier and answering a few questions. Your records will help improve our database and will become publically available on the river obstacles website.

The app is not just for recording man-made barriers. Information provided on natural barriers such as waterfalls is equally important. It allows us to assess how far up the river fish would naturally go, which then helps us to prioritise action on barriers where we would see the biggest environmental gain.

Once we have confirmed a fish barrier is causing significant environmental harm there are many options available for tackling the barrier, ranging from full removal, formal fish passes to more natural fish pass solution such as rock-ramps.

There are already some impressive success-stories out there.

This year, two new fish passes have been completed on the River Almond in the Lothians (at Fair A Far weir in Cramond and Kirkton Weir in Livingston). This is part of a catchment scale project to tackle seven barriers in the river network and open up more than 200 km of accessible river by 2021. Groundworks at these redundant weirs was funded by the Scottish Government, in partnership with SEPA’s Water Environment Fund, the River for Fisheries Trust and two local authorities. 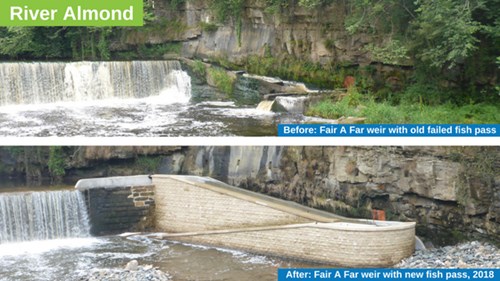 In 2016, an old creamery weir was fully removed from the Old Mill Burn in Galloway. The project was funded by SEPA’s Water Environment Fund and reopened 10 km of valuable habitat upstream, which has now had salmon spawning within it for the first time in generations. 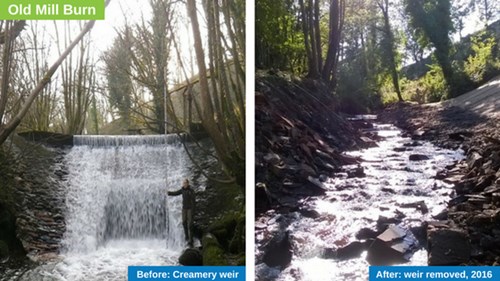 Also in 2016, on the Isle of Lewis a redundant culvert was fully removed, supported by a grant from the Water Environment Fund. This made 2 km of excellent fish habitat accessible to native migrating fish. 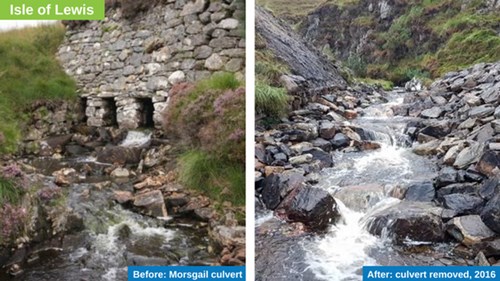