Meet the people behind the map: part three

During Mapvember, we've been introducing you to the team behind the Scotland's environment map and spatial data. In this post we catch-up with SEPA GIS Developer Bruce Smith, and find out about the role he has played in developing our map.

Scotland’s environment web has benefitted from Bruce’s considerable GIS experience through his development of the map application that consumes web map services (WMS) provided by external partners. A new approach for Bruce in developing the Scotland’s environment map tool was the agile, user focussed approach. We had weekly development meetings to review and shape the map application as it progressed where Bruce was able to gather feedback and ideas from a multi-disciplinary team. We also introduced usability testing, with support from the Scottish Government Digital usability lab – where we invited users from a range of different backgrounds, to put the prototype map application through its paces.

We asked Bruce to share some of this thoughts about development the Scotland’s environment map: 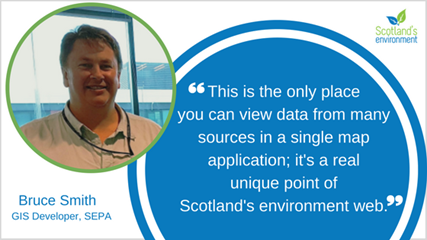 "This [agile and user focused] approach was really beneficial to me as a developer – being able to see first-hand how the application was being used and how people interacted with the different elements and functionality. Developers often take it for granted how people use their products, and this process really opened up new insights into user behaviour – especially for the Scotland’s environment map, which is for a much broader user base than other more technical internal SEPA interactive GIS applications I have previously developed. I was surprised to see that users found the prototype data search facility too clunky. Creating a simple search of complex data was a real challenge, but the user testing helped me to go back and re-look at the map to make it more intuitive and easier to use. The sooner the end user can get involved and see a visual of the application, the better as it stops development going too far down a path that ultimately isn’t suitable for the end user.

A new development feature for me is the responsive framework, as traditionally I have catered mainly for desktop applications. We use the ‘Foundation’ responsive framework recommended by ESRI, which really simplifies development to cater for smaller screens. But as a developer, you still need to think simplification and reframing the functionality you want to deliver in a much less cluttered, simplified way for a non-technical audience on a mobile device. We’re not quite optimal for mobile, but we are definitely heading the in right direction.

There is an array of different technologies that come together into a single seamless application that the front end user is completely unaware of. These include:

This is the only place you can view data from many sources in a single map application; it’s a real unique point of Scotland’s environment web. But it does bring with it development challenges:

So where next for Scotland's environment maps? I'd say that in addition to optimising the map application for mobile devices, we want to look at including web feature services that would allow users to carry out more complex analysis and spatial querying of data. This is key to developing tools for assessments and decision making, providing users with access to the same data from the same source.

It's difficult to pick a favourite map layer; I just like the fact taht I have a shopping basket of options to view in the same place. I can view wildcat priority areas and air monitoring points at thesame time if I was so inclined."

Meet the people behind the map: part one

Meet the people behind the map: part two